Alcoholism is the inability to control drinking due to both physical and emotional dependence on alcohol. Causes for Alcoholism are Genes, Environment and Psycology.

We “once alcoholics” at MADYAMUKTHI are very ordinary people like many of you, but we have experienced the nadir of human dignity. Nevertheless, we are proud that we left our wayward habit or say alcoholism for the sake of ourselves, our family and society. And, we do take an immense pleasure in bringing up many an alcoholic into our own fold – “once alcoholics” of MADYAMUKTHI. We are highly successful in this endeavor. It was around 120 “once alcoholics” at the time of hosting our website, in June 2016. Now, it is just a few days less than 6 months from then, but we are 165 “once alcoholics”. Statistics gives a 37.5 % rise in 6 months and if we make it for a year, it is 75% growth. Success rates at de-addiction centers may or may not match our numbers. But, please note that our de-addiction support is mostly without medicines and without any expense to alcoholics. All we do is to meet every day and share our past and present – the welcome differences we have in our present life devoid of Alcohol.  Sharing is MADYAMUKTHI‘s one and only mantra and it works wonders. This mantra is time and again tested by us as well as many others.

Four out of the above 5 programs were jointly promoted by Malankara Orthodox Church of Kerala. We thank and congratulate Orthodox Church for treading a similar path as ours in the fight against Alcohol.   Orthodox Church is also conducting a meeting on Alcohol Prohibition from 3:00 PM, on 11th Dec 2016 at Puthuppally Valiapally.  Yohannan Mar Diascoros, an Orthodox bishop of Kottayam has sent a special message to his churches about this meeting, emphasizing the need to abstain from alcohol and the necessity to reform those who are under the grip of alcohol and drugs.

This is a short status on the work of MADYAMUKTHI since the time our site is launched. 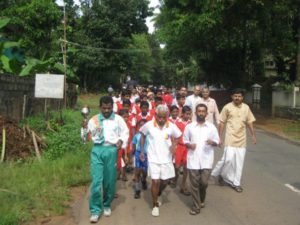 Website is Maintained by ForAGoodStart as  part of its social initiative – ” To Deliver Value to Our Society “.

All photos used in the website are shared by members of MADYAMUKTHI.